CoolSeal SA offers the innovation in packaging: a box that is eco-friendly, affordable without compromising on quality or performance, that offers unique and state-of-the-art branding opportunities. The boxes are delivered flat, pre-folded and packed in bundles, minimising delivery, and storage costs. The patented easy-erect design enables the box to be ready in one simple movement with no other assembly required. 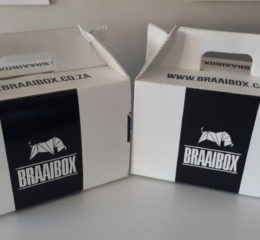 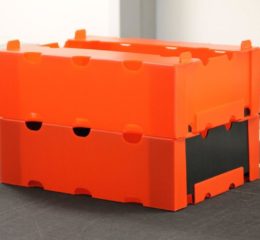 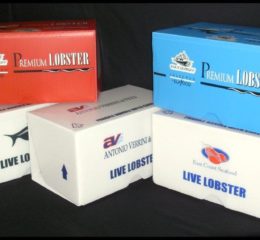 CoolSeal SA had originally been designed and developed especially for the cold chain delivery of chilled fish, meat and other foods and has served as an effective replacement for polystyrene boxes in Europe for several years.

Since its launch in South Africa, however, several new applications and benefits have been identified. The box, we found, is particularly well suited to the agricultural market as fruit ripens faster in the boxes and do not bruise as easily as they would if packaged in Cardboard. The boxes are particularly well-suited to the packaging of delicate fruit such as bananas. Coolseal is also being used for various applications in wet conditions, such as mines.

Our patented technology is used to seal the edges to provide a strong, hygienic box that is virtually unbreakable, eliminating the problem of polystyrene bead contamination and blocked drains.

The CoolSeal Packaging System eliminates waxed cardboard boxes that are virtually impossible to recycle and extremely heavy, as CoolSeal is lightweight and 100% recyclable. It also competes with solid and fibre board boxes, as it is less than half the weight and completely impervious to liquids.

The boxes are constructed from lightweight Polypropylene, a material chosen because of its recycling capabilities and the strong demand for the reprocessed material.

CoolSeal boxes are delivered flat, pre-folded and packed in bundles, minimising delivery and storage costs. They can be stored flat and quickly assembled at the packers.

CoolSeal boxes are tough, which means an end to EPS breakages and beads blowing around and clogging factory drains. They are up to 30% smaller than like for like capacity EPS boxes. This produces significant cost savings across all modes of transport, especially for airfreight.

The patented easy-erect design enables 4-corner glue boxes to be ready in one simple movement. There is also a range of stacker boxes which include easy erect bases and pop up lids. These packs are designed for column stacking and interlocking. The trays can be filled and stacked without the lids, and then moved to icing, labeling and packing areas.

Trapped air is the key. Our patented manufacturing process allows us to seal every edge of every pack.

We have developed lightweight yet wide material that is weak without sealing. Seal the edge however, and the product is transformed, with more air trapped inside. This trapped air in both tray and lid acts like double glazing, restricting the flow of temperature very effectively. There is a significant wall of trapped air around a pallet of fish packed in CoolSeal boxes.

There is a high demand for re-processed polypropylene with a vast array of applications. Who knows, the bumper on your car may be made from recycled CoolSeal boxes!

The flat empty boxes can be baled or simply palletised for collection by a plastics reprocessor. Polypropylene has a higher raw material value than EPS and reprocessing costs are significantly lower.

CoolSeal can be safely disposed of with general plastic waste. PP’s melt-flow index makes it very flexible in the waste stream. Even this option generates huge savings, with skip hire costs slashed and avoiding the ever increasing landfill charges.

This is because CoolSeal when flattened has less than 10% of the volume of EPS. It is also inert and can be safely thermally recycled. It is stable in a landfill so that it will not create dangerous soft spots where lorries can tip over as sometimes occurs with EPS that re-expands. We regard landfill as the least desirable method of disposal that should only be used as a last resort.

Let’s talk about your project?